What is Foie Gras and How is it Made?

Foie Gras is a “delicacy” that inflicts such suffering on animals that it’s illegal to make it in several countries. Take action to help us end the cruel force-feeding of birds!

“Foie gras” translates to “fatty liver” in English. It’s known as an expensive, “luxury” food that’s actually made from a duck or goose liver that has become abnormally enlarged from a disease called hepatic steatosis, which is caused by the animal being force-fed large amounts of food. The liver is sold whole or ground up into a pâté or as another side dish.

WHY IS FOIE GRAS SO CRUEL?: Not only is the act of eating a diseased organ extremely disgusting, it’s also supporting cruelty. Here are some of the things birds used for foie gras are forced to endure: 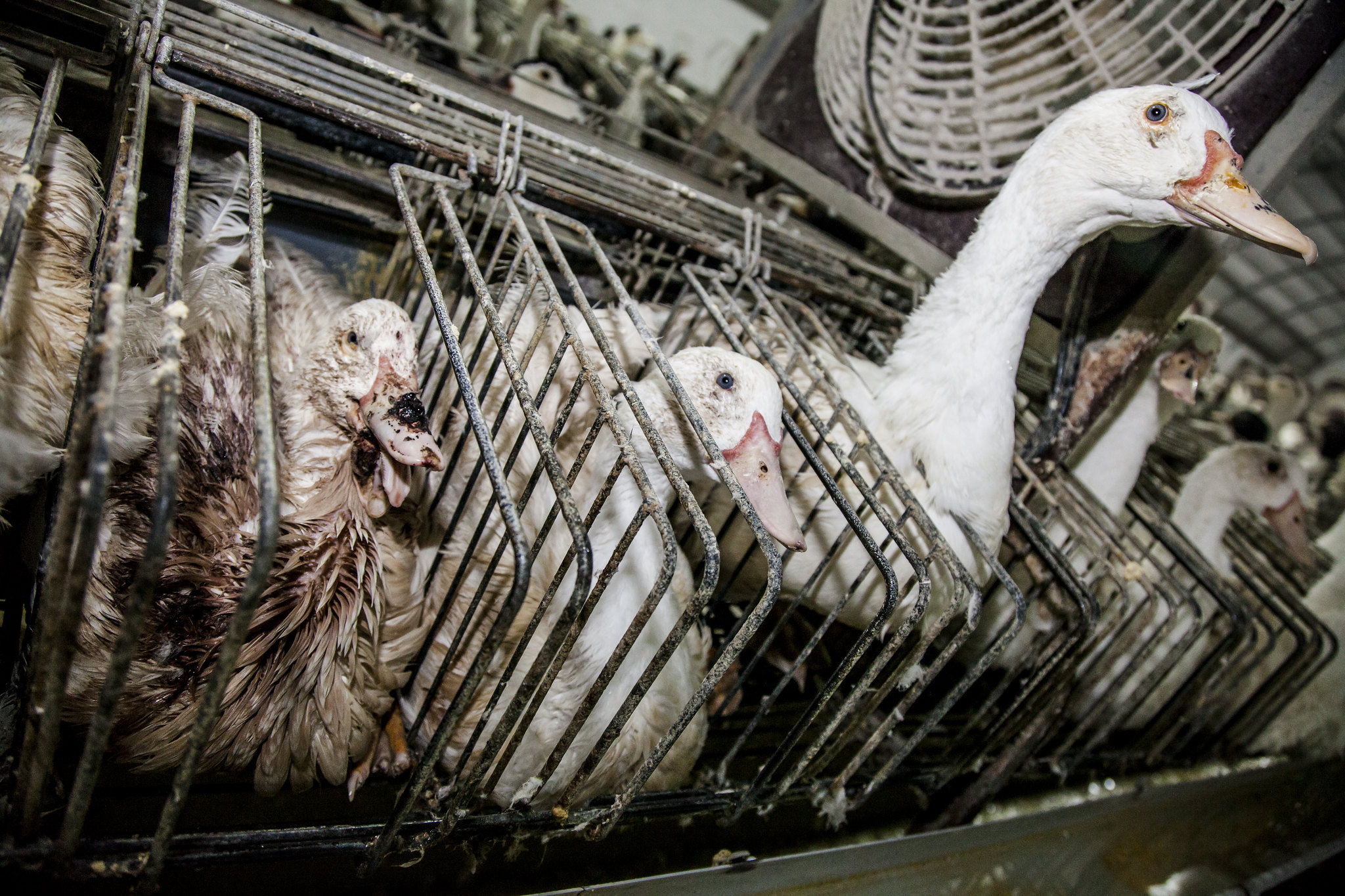 DID YOU KNOW?: Foie gras production is so cruel that it’s production has been banned in several countries such as the UK, Germany, Italy, Norway, Poland, Turkey, and Israel. In the US it’s been banned in the entire state of California and in New York City.

But despite the fact that foie gras production has been prohibited, it’s important to note that the exportation of foie gras to and from other countries still poses a major problem. Because there’s still a demand for the product, large corporations continue to profit from this cruel method of food production. And in major cities around the country like Portland, OR for example, many upscale restaurants offer it as a menu item. So as long as the sale of foie gras remains legal, thousands of ducks and geese will continue to suffer.

After Animal Equality’s successful two-year campaign, India now prohibits foie gras imports, which means that it’s illegal to sell or buy it anywhere in the country.

We hope that other countries will join India in stopping both the production and sale of foie gras. 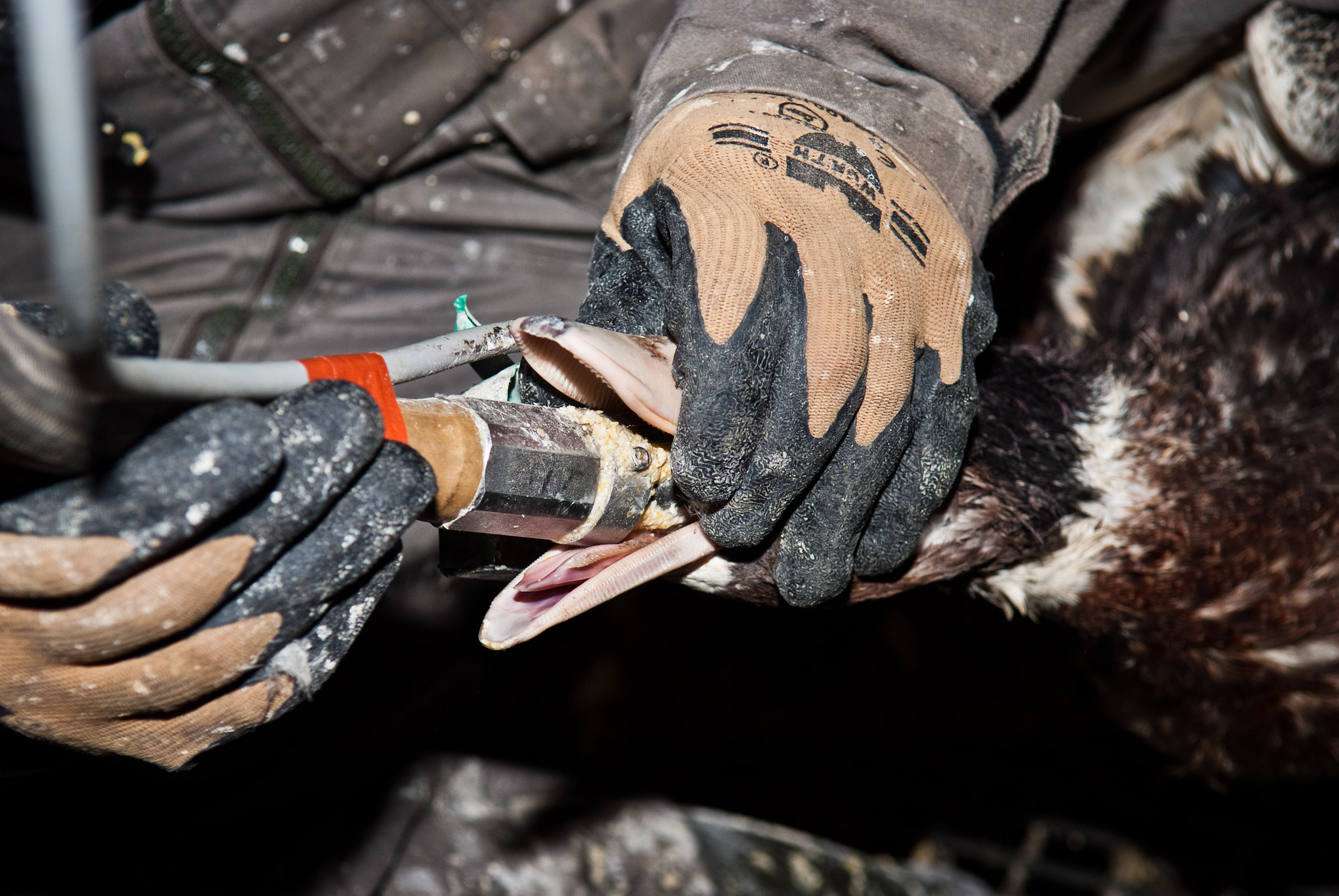 Animal Equality has conducted multiple investigations at foie gras farms in France and Spain since 2012. Shockingly, one of the farms in France welcomes public tours and allowed us a look inside at the birds’ living conditions and the force-feeding process.

What we found at all of these farms were birds confined to small wire cages suffering from breathing difficulties, eye infections, and broken wings and beaks. The birds are forced to endure extreme cruelty and abuse during the production of foie gras.

OVERALL IMPACT: Not only does foie gras violate animal welfare, but it’s devastating to our environment. According to the US Environmental Protection Agency, foie gras operations have violated numerous environmental laws. For example, the largest foie gras farm in the US, Hudson Valley Foie Gras, has violated multiple Clean Water Act obligations over the last decade and has faced numerous inspections and thousands of dollars in fines.

Foie gras also poses a significant risk to public health. Due to the abuse and neglect the birds face, their immune systems weaken, making them more susceptible to diseases such as avian influenza (bird flu). This is concerning because bird flu is contagious to humans. In the US, the most recent avian flu outbreak was in 2014-2015. However, France had a more recent outbreak in 2021 with the majority being at foie gras farms.
As the world continues to endure the Covid-19 virus, it’s become apparent how fast these zoonotic diseases can spread and create a global pandemic.

WHAT YOU CAN DO: Though more and more people are learning the truth about how foie gras hurts animals, there’s still more work to be done! The best way you can help ducks and geese suffering from this cruel “delicacy” is by refusing to eat it and by sharing this information with family and friends so they’ll avoid foie gras, too. Take action now by signing our petition to end the production and sale of foie gras in the United States.

Sign the petition to ban foie gras in the US!

Out and In: Door Training with My Puppy

Arizona Joins The Movement To Ban Cages For Hens

We will be happy to hear your thoughts

Recent Posts
Recent Comments
Deal of the Day !!
About Us

Pet-Shops.biz is modern all in one price comparison and review website that provides the best deals available on amazon & keeps you updated through latest added blogs. All images are copyrighted to their respective owners. All content cited is derived from their respective sources.